Separation of api and implementation

In every project you have to deal with apis and their implementations. While a lot of projects separate the api from it’s implementation through different java packages (mostly named internal or impl), I want to show you another approach and tell you why this approach makes more sense. I call this other approach “implementation separation by packaging artifact”.

Let’s take a look at a widly used project structure that separates the api from the implementation by using a separate impl package. 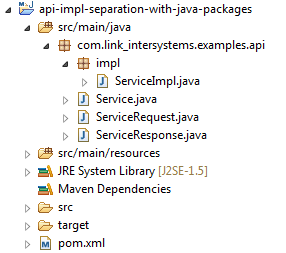 This kind of separation is widely used but it has a some impacts on design and api usage as I will show now.

Let’s think about the client that wants to use the api. If the client wants to integrate that api it must depend on the api, but currently the client will also depend on all the implementation depdendencies. Some developers might argue now that you can use the maven-assembly-plugin to create an artifact with only the api classes, but keep in mind that this artifact is only attached to the pom. So even if you use the maven-assebly-plugin to create different archives for the api and implementation both still belong to the same pom and this means that both still have the same dependencies. The next project example shows that a client will also get all implementation dependencies if you put api and implementation together in one maven project.

If you separate the implementation from the api by using java packages you remove the posibillity to use the java package access modifier which is a powerful language feature. Let’s take a look at some source code to understand the problem:

Maybe you might think that it is no big deal, because the name ServiceResponse makes it clear that noone else should instantiate it. But would it also be so clear if the response type is named OrderTO?

Why don’t we express the way an object should be used in our source code? If we do so we make an implicit contract explicit and explicit contracts are checked by the compiler. That makes software clear and programming less error-prone. So everytime you have the possibility to express the api contract using access modifiers, interfaces, classes or what else – do it.

Some developers argue that this way to express the api contract takes flexibility away because of the access modifier restrictions. Does it really take flexibility away? The class was never designed to be used in another context. So why would someone use it? To get worse using it in another context couples both context to each other and a change to the shared class can easily break it’s meaning in the other context. Making everything public can easily lead to breaking layer boundaries like using domain objects as ui models or ui models as transfer objects and so on.

Prefer a clear spearation of api and implementation

Fortuanatly we can easily get rid of all the pitfalls that are described in the sections before by using two maven projects. One for the api and one for the implementation. 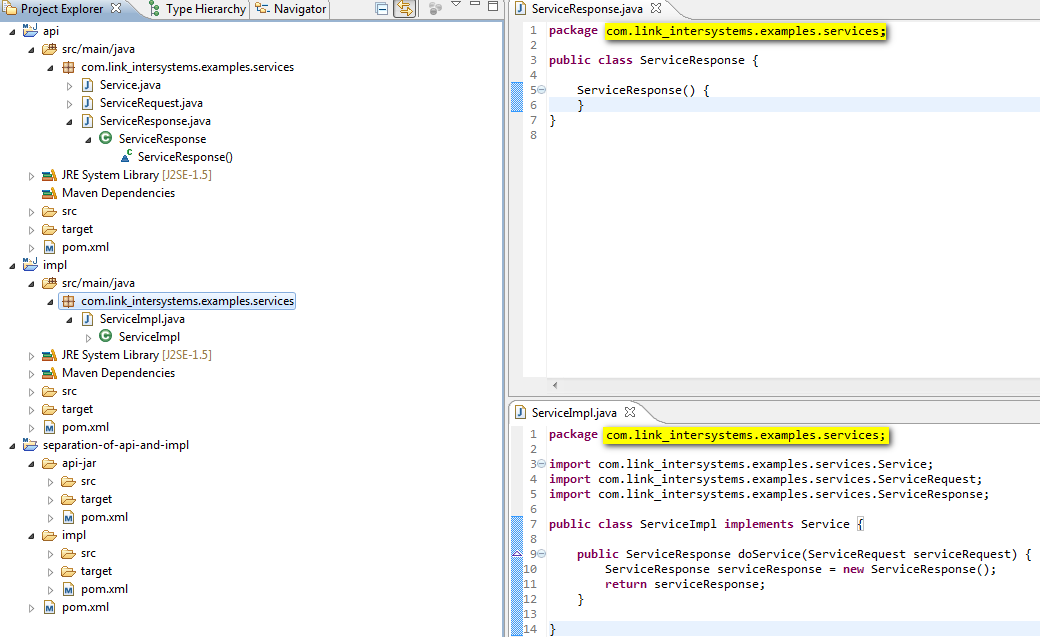 This separation prevents the client from getting all dependencies of the implementation.

I hope I could show why the separation of the api and implementation is important.

4 thoughts on “Separation of api and implementation”

414
XPath: Get parent node from child node
184
How to get a method's annotation value from a ProceedingJoinPoint?
134
How to get the path of running java program
79
How can I parse a String to BigDecimal?
75
Rich vs Anemic Domain Model
70
What happen to Git tags pointing to a removed commit
60
Concrete examples on why the 'Anemic Domain Model' is considered an anti-pattern
59
How to replace crlf with lf in a single file
48
Spring transaction: rollback on Exception or Throwable
43
Why does every object in Java implicitly extend java.lang.Object class?
40
Why use constructor over setter injection in CDI?
38
High memory usage for Gitlab CE
36
Override properties from external property file if exists using Spring
33
Integer.parseInt number format exception?
33
Git pretty format string equivalent of oneline, including colors
31
The MVC pattern and Swing
31
build-helper-maven-plugin add-test-resource error
30
Getting object field previous value hibernate JPA
30
What is the difference between git rm --cached and git reset <file>?
30
Error: require() of ES modules is not supported when importing node-fetch
29
Reading Java system properties from command line
29
Running Bash commands in Java
28
Creating a list with repeating element
27
Unable to pull/push in git repository
26
How to properly convert domain entities to DTOs while considering scalability & testability
24
Powermock (With Easymock) no last call on a mock available
24
HowTo have multiple SPI implementations in one JAR
24
Is Select EXISTS() possible in JPQL?
23
How to force implementation of a method in subclass without using abstract?
22
Does Junit reinitialize the class with each test method invocation?
21
Load a file in Resources with FileInputStream
21
Why removeRange method of ArrayList class is not working?
21
URL matrix parameters vs. query parameters
17
Is it safe to use DateTimeUtils.setCurrentMillisFixed in tests?
17
Is UnitOfWork equals Transaction? Or it is more than that?
16
JAVA: Preventing Duplicate Entries to an ArrayList
15
Difference between SwingUtilities.invokeLater and SwingWorker<Void, Object>?
15
how to mock a servletContext instead of Servlet or HttpServletRequest?
14
Bytecode analysis in Java
14
Time in HHMM format